The trajectories of a sixteenth-century physician’s books

Upon opening a copy of the 1572 Venetian edition of Natale Conti’s Historiarum sui temporis libri decem, the ex-libris caught the attention of Dr. Nina Lamal. Opposite the title page of the book there was an engraved portrait of Alvarus Nonnius by Jan Wierix, dated 1586. In the following weeks, she came across the same portrait pasted in several other books in the Hendrik Conscience Heritage Library. Her interest was piqued: she wanted to reconstruct Nonnius’ library and investigate how his books became part of the collection of the Conscience library. This short blog offers the first results of that quest.

Alvarez Nuñes, latinised to Nonnius, was of Iberian Jewish descent. In 1560, he entered the faculty of arts at the University of Leuven. Three years later, he obtained his degree and became a practicing physician in Antwerp. He was a prominent member of the city’s urban intellectual elite. He edited the first surgery textbook written by Francesco Arceo for Plantin and was friends with the famous cartographer Abraham Ortelius. Like numerous other medical professionals, he bought and collected books. Clearly perceiving his library as part of his intellectual legacy, he adorned the copies of his books with his own engraved portrait. 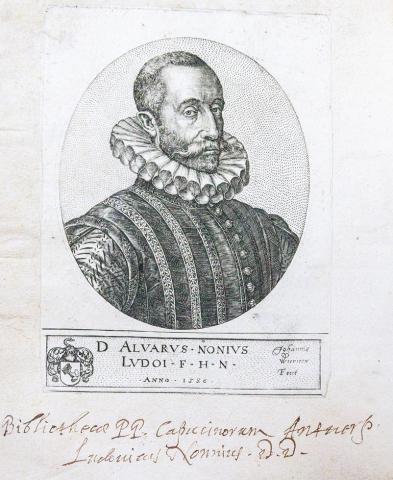 Until recently we did not know which books he owned. So far a research for provenances attached to Nonnius in the Hendrik Conscience Heritage Library has returned ten volumes. The surviving copies are not directly related to his professional occupation as a physician, but reflect his wider intellectual interests. Broadly defined the majority of the surveyed copies are history books or chronicles.

The provenance marks reveal the interesting trajectories of his books throughout time. After his death in 1603, the majority of his collection seems to have gone to his son Ludovicus Nonnius. Like his father, Ludovicus had studied at the University of Leuven and subsequently returned to Antwerp to become a physician. He was one of the co-founders of the Collegium Medicum Antverpiense in 1620 and published various works on healthy eating and diets such as Diaeteticon and Ichthyophagia sive De piscium esu commentarius (‘Ichthyophagy, or Commentary on the eating of fish’). Amongst his patients was the famous painter Pieter Paul Rubens. In 1627, Rubens painted a beautiful portrait of Ludovicus, now in the National Portrait Gallery in London. In this portrait, the connection with medicine is clear as Ludovicus is sitting in front of a marble bust of Hippocrates. His books, however, also receive a prominent place in this portrait: he is holding a large book and next to him several books of different sizes are resting on a shelf. 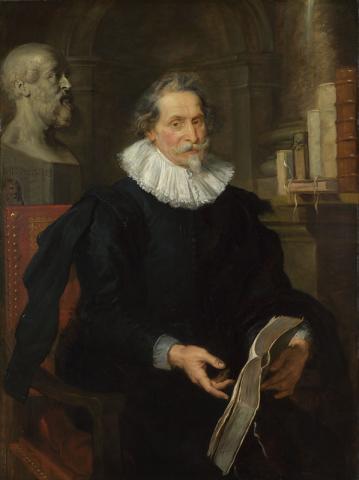 Ludovicus seems to have used some of his books as cultural capital. The Revolt in the Netherlands had severely affected Antwerp’s institutional libraries, with a huge loss of bibliographic patrimony. Among the collective reconstruction efforts, the chapter of the  Cathedral Church of Our Lady established a new library. Aubertus Mireaus created a catalogue, Bibliothecae Antverpianae primordia, offering a first overview of its books in 1609. The catalogue listed the names of the people who had already donated a copy to the library. Its publication was meant to inspire others to give a book to the new library. Among many other wealthy and learned Antwerp citizens, Ludovicus is listed as a donator: a 1538 Froben edition of Hippocrates’ work in Greek. This donation was a clear marker of his medical profession and was one of the only medical texts present in the library. 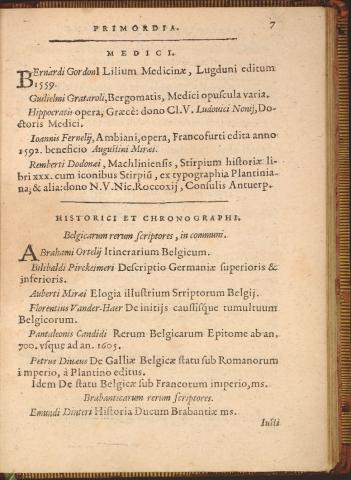 Thanks to this catalogue the story of the restocking of the chapter library is well known. Studying provenance marks, however, reveals that Antwerp citizens continued to donate books to the library, also after it merged with the City Library in 1617. Ludovicus gave a beautiful folio 1528 edition containing Vergil’s opera omnia which he had inherited from his father. (This is based on information in the handwritten note: ‘Bibliothecae publicae Antverpiensi Ludovicus Nonnius Med: D.D. Medicus eruditissimus qui scripsit 'De re cibariâ', 'De piscium esu’.)

Reconstructing the origin of these books by following the provenance trail demonstrates that Ludovicus’s book donations were not restricted to this one library in the city, but were a more widespread intervention. Ludovicus donated some of his father’s books to religious institutions such as St Michael’s Abbey. The newly arrived capuchin friars received several history books from the Nonnius collection, including new purchases due to Ludovicus himself. Having a well-stocked library was important for the newly founded religious houses belonging to counter-reformation orders. To support their teaching activities within the city, religious orders required book collections.

With the arrival of French revolutionaries at the end of the eighteenth century, the libraries of religious institutions were dissolved. In the process many books went missing, some books were taken to France, others were sold, and several were moved to the re-established City Library. This is how several of Nonnius’ books found a new home in the Antwerp City Library, now Hendrik Conscience Heritage Library, where they remain until this day.

Following the clues of provenance research is revealing of the personal investment of many in the donation of books to religious libraries, and there is much evidence that still needs to be uncovered. Books such as the ones gifted by Nonnius, featuring the portrait of his father, had the dual purpose of celebrating the memory of a parent as well as contributing to the social and religious life of the city.